C is for Durham Cathedral and Castle 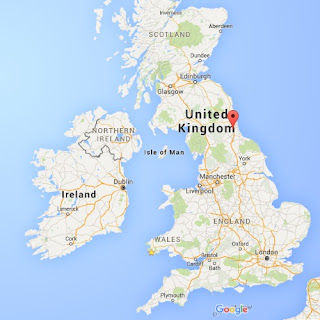 Once again this will be long and photo-heavy, but worth it (I hope!).

The A to Z Tour of Harry Potter Film Locations takes us back up north to Durham City in County Durham.  Today's C is the Cathedral and Castle.
Not too far south of Alnwick ('A') is the historic city of Durham.  The city sits on the banks of the River Wear and is built on seven different hills (or so it is claimed).  Atop the tallest hill are the rather impressive Castle and Cathedral, separated by the Palace Green. Both the Castle and Cathedral are UNESCO World Heritage Sites.

Durham Cathedral is a Norman building constructed between 1093 and 1133.  It was originally built to house the shrine of St Cuthbert.  The Cathedral is still a place of active worship, with regular services occurring throughout the week.  Having visited quite a number of cathedrals across the UK, I have to say that the one in Durham is one of the more impressive ones and worth a visit even if you are not a Potter-fan.  I know I said that about Alnwick Castle.  I'll probably say it again many times.  I'm not sorry.


For those of you who are Potter fans, however, there is plenty to see as the Cathedral appeared in the first two Harry Potter films as both corridors and courtyards.

The cloisters at the Cathedral appeared in both The Philosopher's Stone and The Chamber of Secrets as walkways linking classrooms and the courtyard.  The cloisters in Durham weren't the only ones used in the film (we'll get to those later in the alphabet) and it can be a little difficult to pick them out due to set dressings and some digitally altered sections.  Most notably, Durham Cathedral's cloisters appeared in The Philosopher's Stone as the trio returned from meeting Hagrid's dragon; and in The Chamber of Secrets during Quidditch practice, and when Harry freed Dobby.  In this later scene, a second row of windows were digitally added.


The cloisters at the Cathedral surround a central green courtyard.  This courtyard, with its iconic well, was seen in The Philosopher's Stone when Harry takes Hedwig out in the snow; and in The Chamber of Secrets both when Ron tells Malfoy to "eat slugs" and again when Neville tells Harry the dorm room has been ransacked.

Also featured in the film is the Chapter House, which is used as McGonagall's classroom and office in The Philosopher's Stone and The Chamber of Secrets.  Unfortunately you are not able to visit the Chapter House as it is used for offices and meeting rooms by the Cathedral.  A peek through the window is about as much as you'll get.

On to Durham Castle

Built in the 11th century, Durham Castle has been occupied by the University of Durham since 1840. Students live within the keep, and the Great Hall serves meals to both staff and students.  The University library, offices, common room and chapel are also housed within the Castle.  The Castle is open for tours at set times (it's a working building after all!).  During University holidays, the Castle is available for conferences and general holiday accommodation.

That's right - you can stay in a castle and live out your own Harry Potter fantasies.  I did.  It was amazing.  The room was basic but clean (typical uni digs, in my opinion).  I stayed in the Keep in a room overlooking the Cathedral, and I ate breakfast in the Great Hall.  One of those real-life Potter experiences. I'm rather envious of the students who get to live there full time.

P.S. Over at my other blog Fangirl Stitches, I'm cross stitching both a Supernatural and Pokémon alphabet for the challenge.  Please stop by and check out my progress.  C is for Charizard (Pokemon) and Castiel (Supernatural)