O is for Oxford 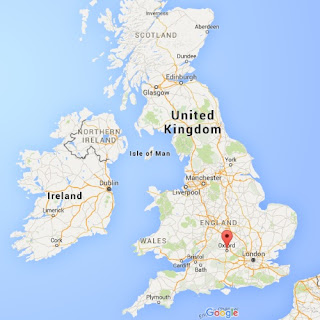 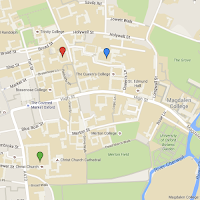 The A-Z Tour of Harry Potter Filming Locations today takes us to what is probably the most well-known location used in filming - the city of Oxford.

Oxford, located in the south-east region of England, is most well-known as being home to the University of Oxford, the oldest University in the English-speaking world.  The University is first mentioned in records in the 12th century.  Oxford is a popular filming location, having featured in numerous movies and television shows, including X-Men: First Class, Inspector Morse, Lewis, and Tomorrow Never Dies.

Again this is going to be a bit long and photo-heavy - Oxford featured quite significantly in 3 of the Potter films.

Christ Church College
Christ Church is a "unique joint foundation of a college of the University of Oxford and the Cathedral of the Diocese of Oxford."  Parts of the college are open at set times of the day to visitors, including the Cathedral, dining hall, and parts of the grounds.  Christ Church has produced 13 British Prime Ministers, which is more than any other Oxbridge (Oxford-Cambridge) college.  Christ Church was the first location I visited where there was a crowd of people clearly visiting because of the Potter link.  It was here too that I found the book "Potter Hunting in England" which made future Potter trips a lot easier. 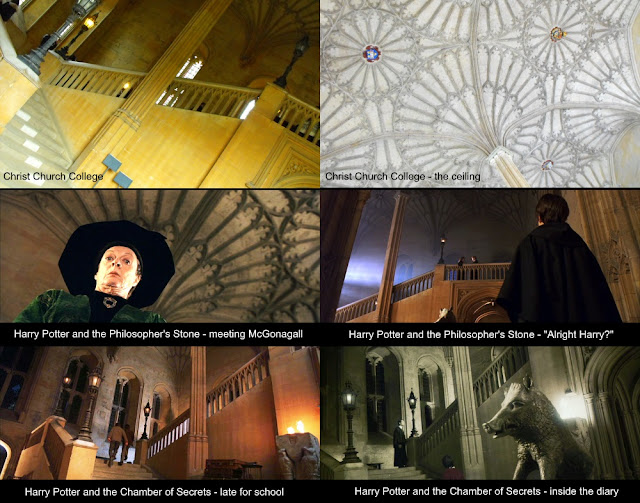 The stone staircase outside the Dinning Hall of Christ Church appeared in the first two films as the entry to Hogwarts.  Professor McGonagall greats the first year students as they arrive at Hogwarts for the first time in The Philosopher’s Stone.  Harry later finds Ron and Hermione waiting for him there after leaving the hospital wing.  During The Chamber of Secrets Ron and Harry are caught arriving late by Filch.  Harry also observes a conversation between Dumbledore and a young Tom Riddle during the diary flashback. 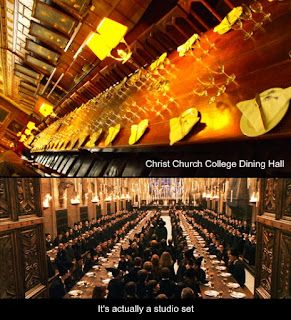 The Great Hall at Hogwarts was based on the design of the dining hall at Christ Church, although the studio set was 1 ½ times the size.  It was the first set built, and the only set to appear in all 8 films.

New College
Despite its name, New College is one of the oldest colleges in Oxford, having been founded in 1379.  Its full name is The Warden and Scholars of St Mary's College of Winchester in Oxford, however it soon became known as New College to distinguish it from the other, older college of St Mary's. 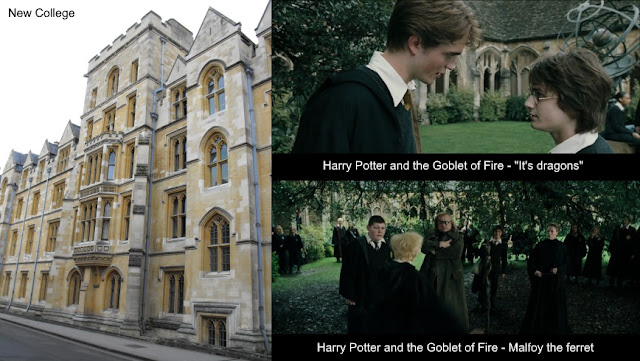 The grounds of New College featured in The Goblet of Fire as the location where Mad-Eye Moody disciplines Malfoy by turning him into a ferret.  This is also where Harry tells Cedric about the dragons, and later calls Ron a “right foul git”.  Unfortunately due to time constraints and parts of the College being closed, I was unable to locate the exact tree and cloisters used in these scenes.  I’ll just have to go back one day.

Duke Humfrey’s Library, Bodleian Library
The Bodleian Library, attached to the University of Oxford, is one of the oldest libraries in Europe and the second largest in Britain (the first being the British Library). Duke Humfrey’s Library is the oldest reading room at the Bodleian.  It is named after Humphrey of Lancaster, 1st Duke of Gloucester who, when he died, donated his collection of manuscripts to the Library.  Duke Humphrey's Library is stunning and just what I think a library should look like.  Photography is banned, so I had to make do with a postcard. 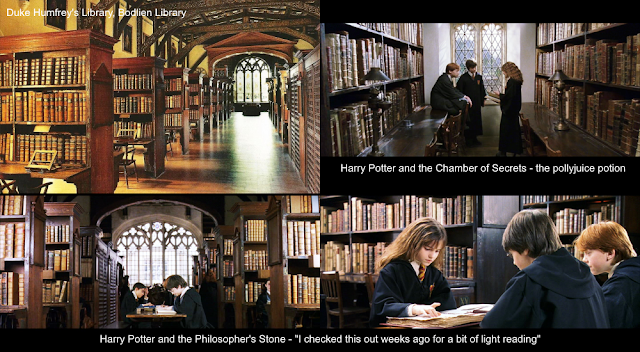 Duke Humfrey's Library was used for the Hogwarts Library during the first two films, featuring when Hermione researches both the Philosopher’s Stone and the Polyjuice Potion; and when Harry sneaks into the restricted section under the Invisibility cloak.  Subsequent films were shot on a similar, albeit wider, studio set.

The Divinty School was used as the Hogwarts Hospital during the first two films, seen when Harry wakes from fighting Voldermort in The Philosopher’s Stone, and again when the bones in his arm are regrown in The Chamber of Secrets.  Hospital scenes in subsequent films used a studio set based on the design of this room.  The Divinity School reappeared in The Goblet of Fire as the room where McGonagall teaches the Gryffindors to dance, including a very embarrassed Ron.

That concludes our tour of Oxford.

For something different, over at Fangirl Stitches, I am working on two alphabet cross stitch patterns for the A-Z Challenge - Pokémon and Supernatural.