A is for Alnwick Castle 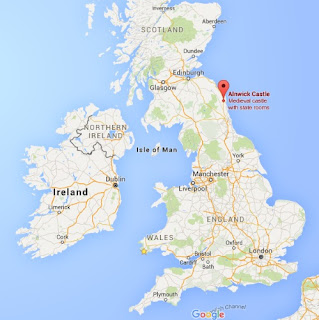 First stop on the A to Z Tour of Harry Potter Film Locations is Alnwick Castle.

I apologise now - this will be a photo-heavy post.

Located in Northumberland, Alnwick Castle is impressive from the get-go.  Amazing gardens, a tree-house restaurant, and a stunning castle and keep.  It is still the home of the 12th Duke of Northumberland, and so is only open to visitors for part of the year.  However, when it is open to visitors, you are actually able to tour sections of the family home, including a fairly impressive library.  Alnwick Castle has featured in many television shows and movies, including the 2014 Christmas Special of Downton Abbey, and (my whole reason for visiting) the first two Harry Potter films.
Alnwick Castle have really embraced their Harry Potter link, with actors dressed as the characters performing at different times of the day, a film-themed tour, and flying lessons.  I did my own thing (the tour times didn't line up with when I was there), and found the following locations:

Alnwick Castle became the inspiration for Hogwarts, forming the original grounds and outer walls, and the base from which CGI walls extended.  The approach to the Castle is immediately recognisable, as it appears in several scene-setting shots in the first two films.  It was also made into part of the Hogwarts model for fly-over shots.
The Outer Bailey of the Castle appears in scenes set in the Hogwarts grounds.  In particular, the Flying Lesson and Harry's Quidditch practice with Oliver Wood were set in the Outer Bailey.  When you visit Alnwick Castle you can attend a flying lesson on the exact spot where Harry first learnt to fly.


Other areas of Alnwick Castle which appear in the Harry Potter films include the Keep, and the Inner Bailey.


Tomorrow we're heading to the opposite end of England, almost as far away from Alnwick as I'll get during this challenge.

I'm also completing the A-Z Blog Challenge over at Fangirl Stitches, where I'm stitching two of the alphabets from my Etsy Store. A is for Abra (Pokemon) and Anna Milton (Supernatural)
Posted by Unknown at 19:00